"Dora's Page": A daily photoblog.
Just a few photos a day to stay in touch with Calgary family.

My library. Practically a family member.

My Grandmother's Diaries, Scanned
My grandmother left the family nine volumes of handwritten diaries. Many entries are dull, but they start off with her European Tour of 1910, Age 19, which have become historically interesting for what tourism was like back then, and later volumes will take us through her nursing career in World War One.

Volumes One and Two are now up at link above.

I had this career with two different disciplines: Civil Engineering, deciding which water mains to replace (and later, sewer, too) and IT development, mostly of GIS systems. I have degrees in both sciences. (Engineering, 1980, Computer Science 1985). I feel very lucky to have been able to combine them, bringing GIS tools to make for better engineering decisions. Between that, and mostly from helping start a major corrosion-protection program, I figure we saved the City of Calgary about a hundred million dollars on pipes they didn't have to replace.

It took about 20 years, but I finally developed a statistical model that would predict the likely number of main-breaks for the next year of a water pipe; a model that could be applied across an entire pipe database to give a risk-in-dollars-per-metre for each pipe, constantly. The database was then updated every night for risk levels, changed after every main break. It could then always print out a prioritized list for replacements.

Basically, I automated my own job of picking the yearly replacements by hand. My successor was able to expand her duties considerably, get out in the field more with the new inspection technologies. We co-wrote the paper on my model, delivered at the Western Canada Water and Wastewater Conference in Calgary, spring 2016, right after I retired.

PowerPoint file for "Calgary Water Main Break Prediction Model" All the speaking notes to go with each slide are included, so you can follow the whole presentation.

The thing I helped along that did more good than any of the other things I brag about on this page (Main Break Prediction Model, Pipeline Inspections) was the retrofit of magnesium anodes on iron mains as a corrosion-protection system.

We started the program in 1998 and it still goes on, may now mostly be re-retrofitting anodes that wore out over 20 years, to keep the main going another 20. I estimated around 2015 that it had already averted a thousand main breaks, saved over 20 million repair dollars and a hundred million replacement dollars; by now, you can add a good third onto those numbers.

I never did do a public presentation about it - they were all internal, for my management. Here's a few slides I can show.

The last several years of that career, my job was expanded to sanitary and storm sewers, when the two departments merged. Having developed a general approach to the "risk of a main" problem for water pipes, I was able to find an equivalent for sewer pipes: a model where the various things in its history (video inspections, past repairs) could predict the risk of future dig-repair needs, future flushing needs, and prioritize by risk. That model needed a lot more consideration of the "consequences" of failure, much higher if sewage spills into the environment than the street. A new engineer-in-training worked on that, under me, and we did a paper at the same conference about the equivalent sanitary-sewer risk model and rehabilitation priorities.

So it was quite the photo-finish to a career; the Sanitary Model showed a high correlation coefficient indicating statistical value, only weeks before I retired, was presented months after I did.

I was pretty proud, though. I solved - for Calgary, at least - the Holy Grail of Asset Management: entirely automatic risk prioritization. Then I did it again, for a quite different asset class. Most utilities still make these decision entirely by "gut-feel", or by rules-of-thumb. I'd found our old rules-of-thumb to be very wrong, in the course of developing a scientifically-defensible replacement. The fact that I was able to do it again, in such a short time, shows that the methodologies I developed remain valid, despite the type of infrastructure; they are general principles.

Utilities around the globe, but especially where there is a lot of old infrastructure, are wasting billions per year on replacement by poor guesswork. The "infrastructure crisis" is bad, but not actually quite as bad as many engineers portray it; with good data and good decisions, with new inspection and rehabilitation technologies, we can get a lot more value out of old infrastructure than we think.

Others carry on with these models at The City of Calgary Water Resources, but I hope they find application across the industry.

Speaking of new inspection technologies, I gave three presentations in retirement that explore the very state-of-the-art in pipe inspection, an industry where my native Alberta is an unquestioned world leader. I was very lucky to have worked with both Pure Technologies, and especially with PICA, both proud examples of Alberta's high-tech consulting to the world.

The infrastructure-evaluation methodologies I developed were for whole asset types (all 50,000 water pipes, say) where you have limited information about them. Pipeline inspection technologies bring your information to a whole other level, allowing for near-certainty about the pipes inspected. It's where you go next when the statistical models indicate a concern.

Powerpoint of my Presentation to the National Association of Trenchless Technologies 2019, Denver, CO

Powerpoint of my Presentation to the American Waterworks Conference Workshop on Water Pipe Management2019, Chicago, IL

(There's some overlapping material between the two).

Good Summary of My Whole Job

This PowerPoint Presentation (speaking notes are included) to the Canadian Network of Asset Managers in 2012 was a 20-minute summary of 10 years of "Asset Management" work, (some of which went back 20 years, really) for both the Water and Sewer utilities. For those with only 20 minutes or less, this would be the quickie version of my career story.

I retired with five other guys and it was this great party. 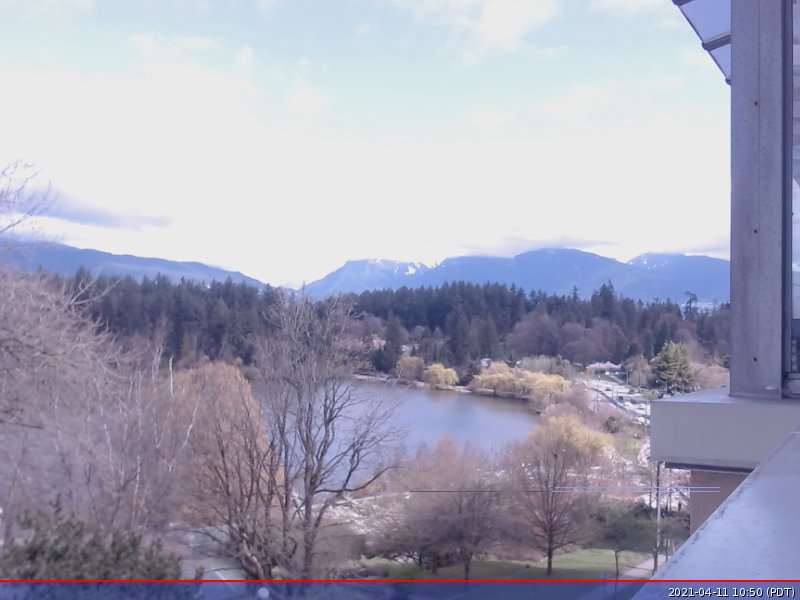 The Lagoon Cam has been mothballed because we do so much Zoom these days, it's always needed inside. We discovered how useful it was for Skyping and teaching kids remotely.

Click on the image to go to a animated GIF image of the shots from the previous hours. (That GIF is refreshed every hour, so from 3:01-4PM, you'll have a little movie of Noon-3:00.) Currently frozen at the 3 hours previous to the image at left.

The page where you view them has multi-megabyte GIF files for whole days; on sunny days, you can watch the shadows move across the street in a few seconds.

Skypers out there, I can't recommend enough that you buy a plug-in camera, and get a long USB cable extension. It's fun being able to put books and landscapes and pets on camera.

Random essays from before the blogs above