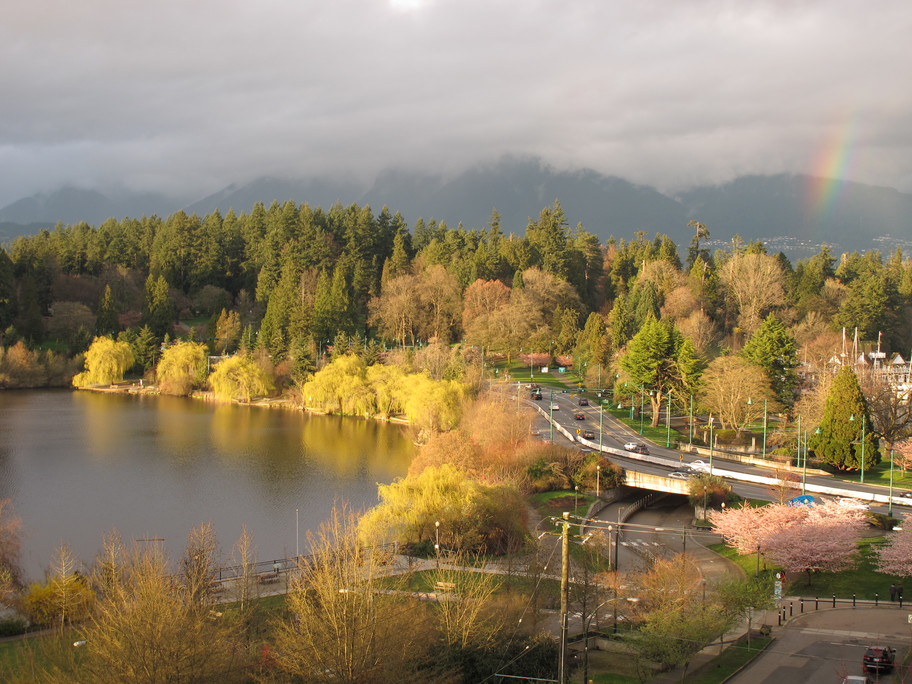 Now, there's no text that can add to a picture like this. You either have a beautiful view and a rainbow and it's sunset or you don't. If you have all that, no need for words.

But, I'm just going to add in some words anyway, because I thought they were very good. They come to us from the brilliant retired Colonel, Andrew Bacevich, and concern questions that Obama ws asked in a recent interview. Bacevich thought it was really great that they were at least raised:

"What exactly does Great Britain bring to the "special relationship" that should justify its continuation? Even if Berlin was worth fighting for a half-century ago, why does it follow that Kiev is worth fighting for today? Does "the West" actually exist? And even if it does, why should the racially and culturally diverse United States choose to affiliate with that one particular tribe?

With the world's economic center of gravity shifting to Asia, what is the residual significance of free-riding Europe? How should radical changes in the global energy environment affect the status of the Persian Gulf in the U.S. strategic hierarchy?

Given the paltry results achieved through myriad recent U.S. armed interventions in the Islamic world, what exactly is the present-day utility of force? Under what definition of the term "ally" do countries such as Saudi Arabia, Israel, and Pakistan - each routinely behaving in ways contrary to U.S. interests - qualify for that designation?

Matters such as these deserve to be front-and-center in the 2016 presidential campaign. None of them will be, disagreements regarding the correlation between the size of a candidate's hand and the length of his penis taking priority. "

It took a few more weeks than last years, but the trees just below our house have burst into bloom. How quickly it happens; on the seventh of March, the tree looked more rusty than pink as the very tips of the blooms were just starting to peek out. On the eighth, it looked like this, with the blooms almost full. 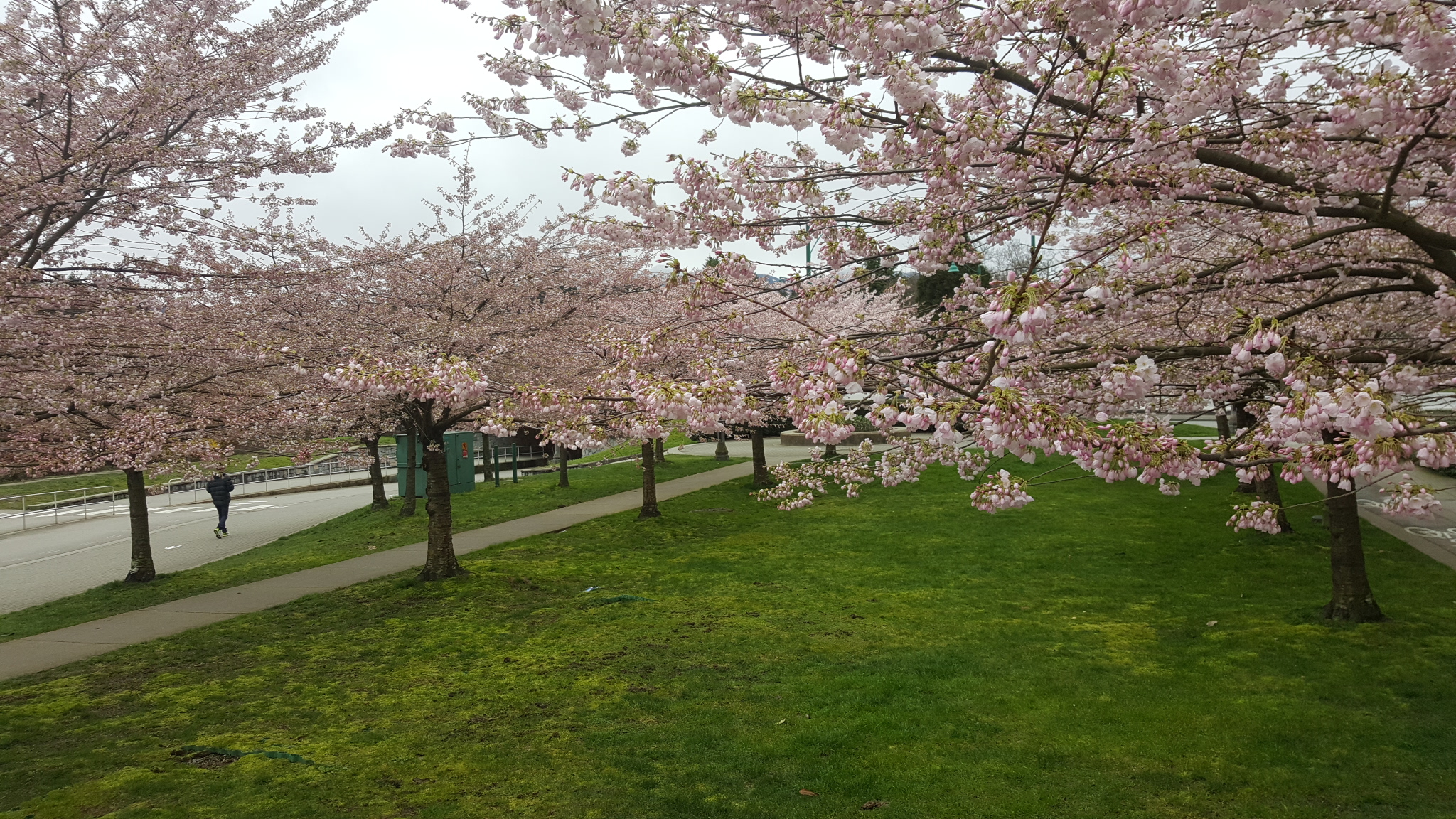 And by the ninth, all the trees were in just about full bloom. Today, they look even fuller, from a block away in my patio. But I ain't goin' out there for another shot. It would be depressing in all that heavy rain and cold. Well, a sunny day is coming - I believe it was in the Prime Minister's election promises - even if the weather channel can't see it from here. 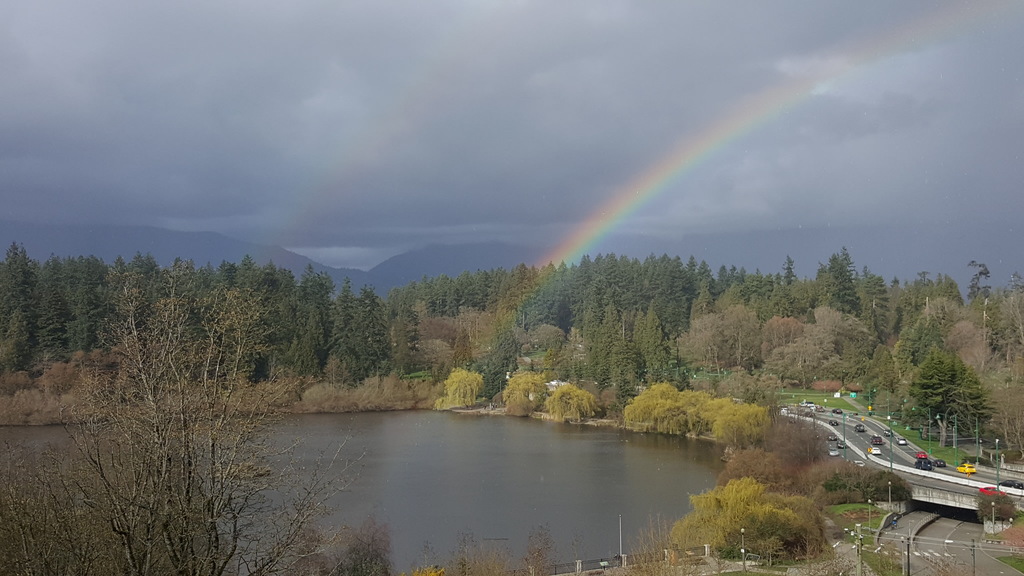 It's been a long, hard rainy day here, pretty depressing.

So it's pretty poetic when some sun breaks out just at sunset...and it's a rainbow. In front of the patio. Sorry if it's a bit cliche', but we haven't had this here yet, for all the rain.

I think it's back to rain tomorrow, though. So I have to go out now.

Marathoners display impressive grit, on yet still ANOTHER rainy day in Vancouver; just pouring down and looking so foggy and dark and depressing. But they beat on, boats against the current, borne ceaselessly back...no, wait that's the end of "Gatsby".

But they run on, cheerful bounce in their strides, their neon clothing the only bright lights in sight.

Valen Times, as some kids I know would put it, should be upbeat Times, but it's tough in Vancouver this week. We sodden Vancouverites must cling (not bitterly) to our upsides:

I realized this morning that I don't have a recent picture of the view. Well, maybe it is less beautiful in the winter, with most of the green trees gone leafless or turned brown, but you can't beat the snow on Grouse Mountain even as it's cool but nice here in Sunny Vancouver! 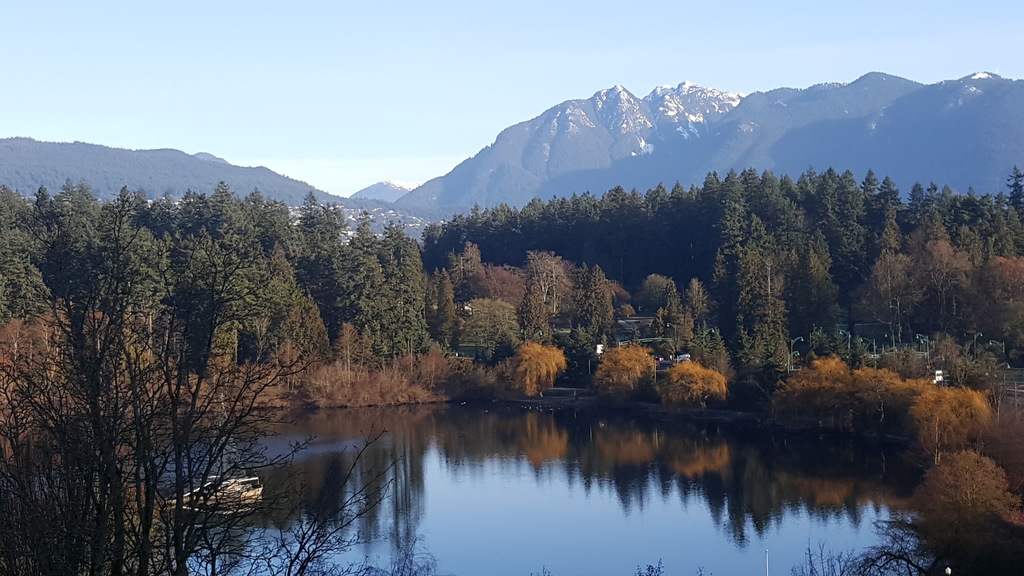 So the other day Dave Russell calls up and asks me to phone-attend his board of directors meeting for PICA, the pipe inspection company. They really do want me to give them some advice on how to explain how much money Calgary saved doing that stuff for 16 years.

It's kind of flabbergasting, really. New technology invented; we published a paper that says "it works well enough to save us money" about 2001, then we proceed to spend over a decade doing that. I made many presentations at conferences and to visiting fellow municipal engineers over those years saying, "Well, this works, and we're provably saving money, here's the proof."

....And...all too few of my opposite numbers listen and follow. Just a few. For those that do, none of them write papers saying, "Hey, we were burned, Brander was wrong, this sucks." It works for them, too; but it STILL doesn't catch on.

This really is a remarkably conservative industry, when you come down to it. Well, PVC took decades to catch on, and ductile iron was over a decade displacing cast iron. We are just that conservative.

So I guess I get to make some spare change repeating the message. Fine. I was just reading today about Tim Geithner, just about to make his pile by indulging in risky speculation with borrowed money. Seriously?? Yup. As the various articles point out, it's not so much a payoff, as an acknowledgement that Geithner will always have the best advice, knowledge and backing. Loans to him are just safer than for other people. But at the end of the day, if Geithner - and those loaning him the gambling funds - lose money, it'll still be well spent. The next Treasury Secretary will see, and know that he'll be well taken-care-of as long as he's not a stranger.

My position, on the other hand, is quite comfortable: I said the same things as a public employee that I'm saying with PICA mailing me cheques. The project worked; Calgary bragged about it because it was a success, PICA gets to brag about the same success.

So; there's that. I'll also be getting back, today, to working on the WaterRF 4471 project, an hour or so a day, and today at three PM is the stairs gang, back at it. It's starting to feel less like retirement already. 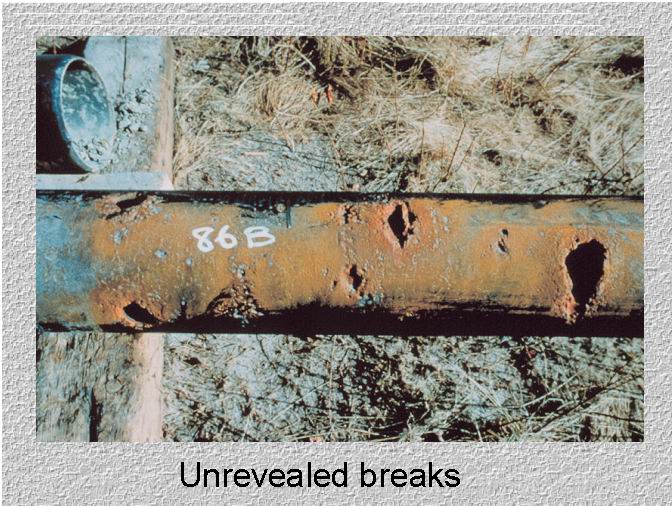 This 20-year-old-and-more image comes from an early presentation about our research into iron pipe corrosion. The WaterRF project (4471), on the effectiveness of pipeline inspection, has asked me to write a chapter of their report, and it has me looking back at our old Hydroscope data and writing "war stories" about decisions made with it. Dan Ellison of HDR says he'll pay me for the chapter, so technically, I'm employed again.

Which feels altogether too good. I hope not because I have a neurotic inability to retire. I hope it's because it feels good to tie up some loose ends and get documented some how-to intelligence that was never actually written down, for all the research we did; we always quit when WE knew what to do.

And with a big thanks and a shout-out to Bill Ng, who always knew what to do and has been helping refresh my memory with some excellent E-mails today. 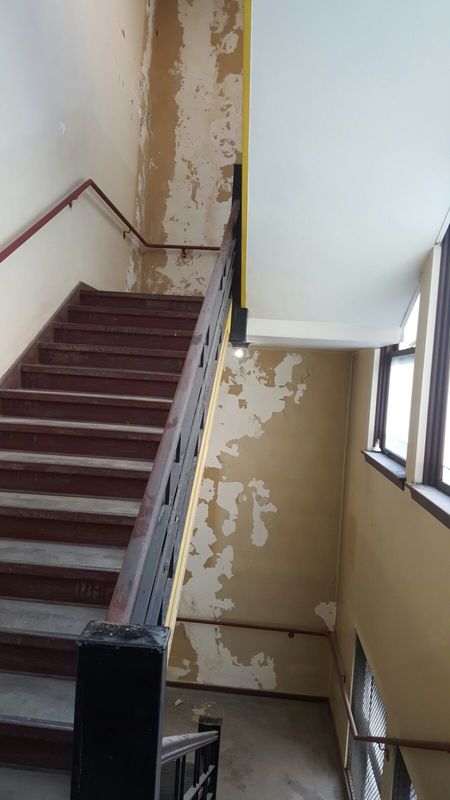 So, the old stairs had their drawbacks. Just a long walk away, for one thing, and outdoors and kind of busy, for another, and not even half the height of the Water Centre stairs, which are kind of my "standard" from lack of any other stairs, ever. Seven stories and 175 steps is just the natural rep.

As should be clear, they've seen better days, but the problems are purely cosmetic. They're in an older retail building of great sentimental value.

The problem is that a minor effort by the building staff has been made to hint that the stairs should not be used at all: 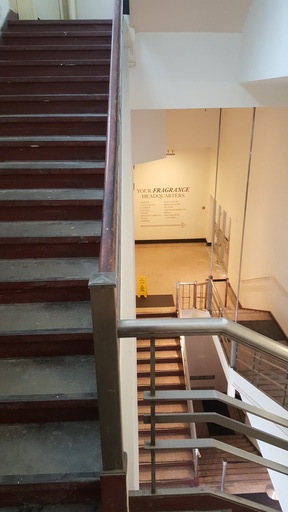 The two little poles with webbing between them, familiar to all who've ever been herded by them in an airport, bank, or movie theatre, have been placed across the bottom step of the grand staircase at the establishment's entrance.

For that reason, I determined to exercise a little discretion; and be no bother to anybody, by not going down below the second floor landing. The stairs go up past a sixth floor landing before the lights are out for the last flight up to the roof, so I have 10 flights of 14 steps available. This happens to work out to 10 reps of mine equal to 8 of the Water Centre standard set, or 15 of mine are their 12 - our current target. 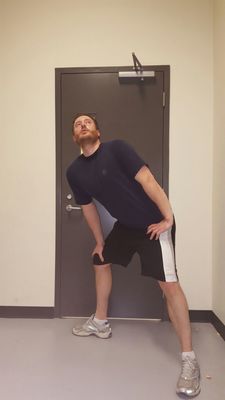 So they can do their run, I do mine, we get a similar push to show up by each other's prodding, though mine must be electronic. And I send them pictures of the Vancouver landscapes seen from my stairs, they send pix of Jeff attempting to look dynamic (left) and Joanne attempting to look ugly (redacted) and both of them failing miserably.

So as long as nobody reading this page recognizes the building entrance on this page and squeals on me to the Stairs Police, I think I have my new twice-weekly workout location solved.

But I think the secret is safe. There are so many stupid personal blog pages in existence getting the details of everybody's every meal, workout, and belch, that it's easily the safest place to put confidential information: where nobody would read it. 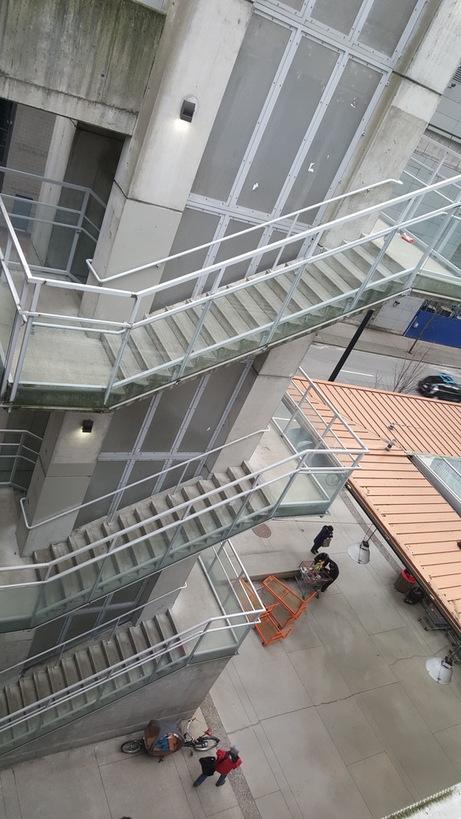 You'd think I could also retire from doing stairs: 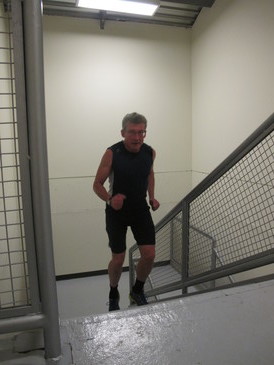 Tuesday and Thursday. But nooo, Joanne taunts me with pictures of cheery stairsaletes flushed with pride.

So I started looking around Vancouver for stairs.

Best I've found so far is this 78-step set beside the Chinatown Skytrain station. Not quite half the elevation of the 7-storey set the Water Centre has, but perhaps a bit of sport nonetheless. How busy it is at the time could add a difficulty factor.

The Water Centre Stairs Team may be about to branch out into the Western Canada Cyber-coordinated Stairs Team. Provided there's enough technology.